So this morning I boarded a plane to Namibia to visit friends and attend the much acclaimed Namibian Annual Music Awards (NAMAs). It was my first time on the plane and I must say that it was the exhilarating and I could not wait to explore the beautiful land. So at 7:45 am (Namibian time) I landed in Hosea Kutako International airport which is located 40km outside Windhoek.

So as a celebrity *hides*, found two people holding cards with my name on it waiting to pick me up. I felt really special at that moment and since there is only one Vuyiso I could only get into one car. Nafis( the friend) who I drove with was very receptive. You can imagine my excitement when I got into the car and there was South African gospel music playing. I definitely felt at home and felt that all was well with my soul and journey was blessed. Even though he does not understand the words, Nafis actually loves all of the songs. 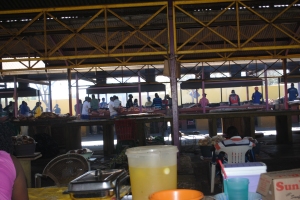 So as my designated tour guide he (Nafis)  took me around Windhoek and I must say that it is the cleanest city that I have ever seen. It felt familiar because it had all the major banks and stores that we have in South Africa. I totally agree with the survey that found Windhoek as the cleanest city. As a woman who loves her food I had to ask about the best spots to get lekker food. A kapana is a place where they sell and braai meat more like a shisa nyama but the difference is you eat your meat on the braai stand as it is being  braaing provided you want medium rare or well done. It was an experience I tell you.

I met the most energetic 12 year old boy who dances so well and is up to date with the South African music scene. He is full of life and is so receptive. You would swear that we have known each other for ages, he is like a little brother to me and he is so eager to teach me Oshiwambo (his home language).He even taught me how to make buttons, he is a young stylist who takes after his uncle Loux.

And guess what? There is a township called Soweto. It is not as big as our Soweto in South Africa.

The night ended with some work being done at the taylor helping to make buttons and being a stylist nyana. It was absolute fun and of course we had kapana, meat galore.