For the second time this year Intern By David Tlale had a show at Mercedes- Benz Fashion Week Joburg and as always the six interns did not disappoint. Comparing their show in March to their show yesterday there was significant improvements and we all expected nothing but the best from them seeing that they are being taught by David Tlale one of Africa’s best designers. One designer who stood out for me was Ntando Ngwenya whose collection was inspired by  what he sees as AfroFuturism taking African fashion to the future.

This collection is the highlight of my creativity, staying away from the norm of basic clothing to architectural lines. – Ntando 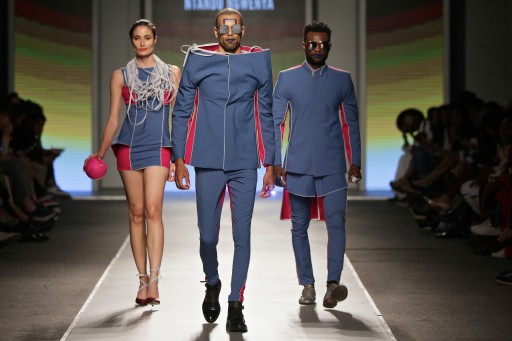 Ntando says he is taking African fashion to the future and there is a new approach to pattern engineering that he has discovered and that is the seamless front cut. He used sports luxe to put the message accross. The use of lipstick on the male models was simply to re-enforce that in the near future men will be more comfortable with wearing make-up and the beauty industry is also now making beauty products for men. After his internship Ntando plans to go back in to business and improving his brand . With what he has learnt he believes that he stands a chance to stand out in the fashion scene In South Africa.

All photos by AFI