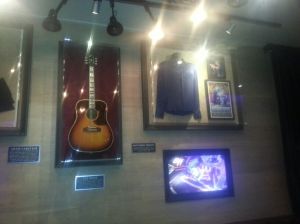 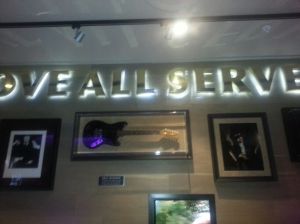 All things music inspired. A couple of weekends back I had the privilege to be one of the few people to have dinner at Hard rock Café in Nelson Mandela Square before it opens to the public. Hard Rock café claims to be the next hot thing in the Square.
Hard rock is famous for displaying the Rock n Roll memorabilia. As I waited at the entrance admiring the view and pictures of this new establishment I was entertained by a very friendly young waitress by the name Slick, the amazing thing was the fact that she was not on duty at that time she was on her way home but she still came to entertain me and my cousin telling us we will enjoy our dinner she really gave us things to look forward to.
As you enter the restaurant the first stop is the Rock shop, here you will be introduced Hard Rock T-shirts. There is the Hard Rock city T-shirts which simple means every Hard Rock in the world has a t-shirt written Hard Rock and its city for example they had the Hard Rock Johannesburg. Neo helped show me around the Rock Shop she mentioned that the hard rock customers are family in a way that every time they visit other places in the world they also visit Hard Rock cafes and they buy the Ts, hard rock is not just another café it is culture.
From the t-shirts we moved to the pins. The pin Display is made up of the pins which are inspired by the city for example some of the pins had the Vuvuzelas, Umnqombothi, the South African flag and anything that is South African that you can think of.
I was offered my table, after all I had come to eat and relax. Each table has a Samsung TV screen, this where you get to watch your music as it plays. We ordered our drinks the curious me start looking around. There is Memorabilia in each and every table but we will get to that later. We ordered our drinks and starter. I had gone with my two year old sister immediately they got her something to keep her entertained paper and crayons.
Our starter was Jumbo Combo for four people this came with chicken wings, baked potatoes, lettuce chicken strips and sauces for deep. I loved every little of my starter.
For the main course I had Fijati this is a wrap but not just any wrap you have been buying from your regular cafés you go to. You receive a plate with all your greens on the side you will have your wrap pita bread. The other plate is made up of either a choice of Beef and Shrimp or a mixture of beef, chicken and shrimp and you know I love my meat so I went for the trio
My friend on the other’ hand also loves his meat being a man he went for the obvious Steak! He went for the very juicy New York steak 300g which came with mashed potatoes and my favourite greens Broccoli, I couldn’t help myself but I helped myself to his plate when he was still adding salt and paper
Dianne the ever friendly and ever there when needed waitress suggested I have mango tango to go with my meal. My oh my, my tastes buds went volcano on me, the combination of my food and the taste of my drink was such an amazing, cannot be described taste. 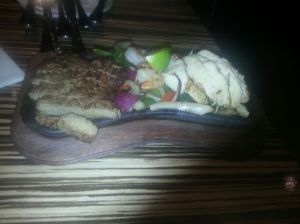 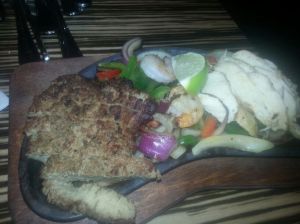 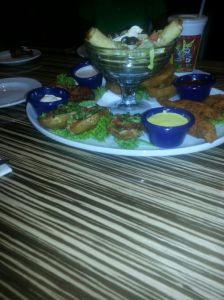 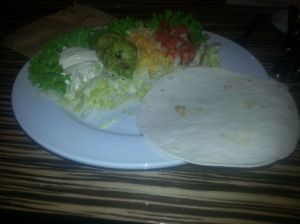 As stated before there is memorabilia in display in each and every corner that is from the young and the old music legends from their hats to their sneakers. The first one was the complete over the top suit Elton John wore on stage in the 1970s. Another interesting one I saw was the leather pants the legendary king of rock Elvis Presley used to own. They did not only have international artist but also sneakers signed by the one and only Danny K. These sneakers were hand painted in New York 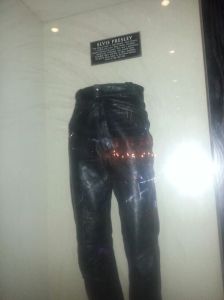 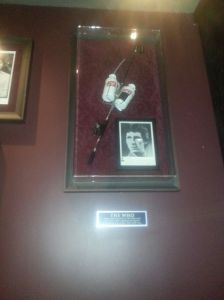 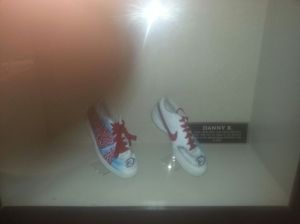 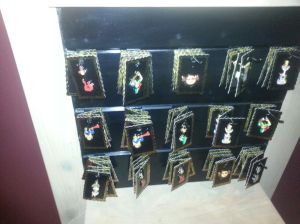 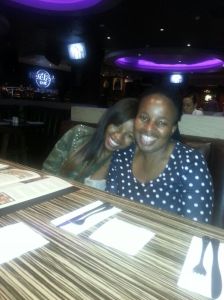