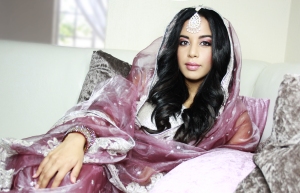 So I was afforded a chance to interview Zakeeya Patel by the Previdar Magazine team. It was really lovely to meet the actress who is so down to earth and was willing to accommodate me. She was shooting for Previdar and you must keep it locked to http://www.previdar.com to see her shoot and interview . She was so excited about her shoot with Previdar, the  theme was apocalyptic Africa, animalistic, raw, artistic and playful. She is really playful and likes cracking jokes. Seeing her and Lawrence Manyapelo (The photographer ) in action was so much fun.

Like me Zakeeya hates winter because she has to wear clothes. She is a short shorts and a vest kind of girl. They used to force her to wear clothes in pre-school they would call her parents to come pick her up because she would take off my clothes. The minute she got into the car she would take off her clothes. When she did Marie Claire Naked issue shoot her mom wrote on her wall “your picture is so tasteful and angelic, it’s a change to your naked little self who was so cheeky and never wanted to wear clothes”

Tell me about you

I just get these immense feelings, crazy amounts of joy and it feels like there is sunlight bursting through my heart and I am so grateful of people and things that I have in my life. People don’t know that I am very anxious, I am weird about time and I am crazy I am a time crisis baby. I am very easy-going but there is also a side of me that is uptight, panicky, weird, strict and very serious.

My biggest fear is getting hit by a car after waiting in a bank line for 20 minutes. Imagine spending the last 20 minutes of your life waiting. I think it is so disrespectful when other people waste your time. The joke that when my mom was carrying me in her womb, I just wanted to come I was like ‘mom I am ready’ and she was like ‘you stay in the oven’ so I have always been funny about time.

Have you always wanted to be an actress?

Or a mermaid since splash days. I have always wanted to be an actress but there is a big part of me that wanted stability and routine and schedule and I really crave those things. You don’t get that in acting I was going to study architecture or psychology, I actually studied psychology with my degree but there is nothing but acting for me. My friends joke that I am like Lady Macbeth that I am so ambitious and I would dash my child bare brains out.

Did you study acting?

Yes I went to UCT, spent 3 years there having the most fun ever and I spent a large amount of that time looking really hideous. Transforming was my favourite thing. I wore a fat suit a lot and old aging making I was never the same ever and I pride myself in that as an actress I was able to transform. I have been lucky in my career that I have never been the same; I have played a 16 year old Muslim girl, played a complete tart, a wild party girl. I don’t want to be ever put in a box I want to move people that is why I am an actress it’s not the fame or the money. I just want to move people to feel whether is good or bad and I feel like we have all became desensitized as South African actually as the world in general. We can read a headline about a baby being raped and its like ok a baby is raped but when a performing artist  opens a fire cracker up his behind a lights it then everyone loses their mind. Then you wonder what is more shocking? And why are we ok with the baby being raped?

I think every actor should study psychology, behavioral psychology is the most beautiful and it is part of your job as an actor to watch people and to note behavior. Children are phenomenal in that because they aren’t socialized. They get taught how to behave, to be quiet, but children are so uninhibited and honest.

I want to be a baddie, I would love to be bond girl coming out of the ocean with big boobies bouncing and grab a gun where nobody can see it with a dress so damn tight they can’t even mic me. I would really love to do action superhero movies, play a baddie (not a villain).

How do you feel about the movie Long Walk to Freedom?

I understand why they cast international people in a movie like that, I mean you want ratings but I think the story was enough for people to go watch it I mean this is a story about Mandela, who wouldn’t want to watch it? I don’t think it needed big Hollywood names as a calling card. I feel like we as South Africans and African that story is in our blood, it was a great overview but it wasn’t our blood. Our actors are so talented that I think it could have been greater, like I said it wasn’t our blood.

Not at all. I don’t follow fashion trend because I do not look like the model in the magazine with that outfit on. I have a specific style and I have learnt very quickly that loose flowing stuff is not my drill. I have to wear tight stuff that shapes my curves I work with what I have got. 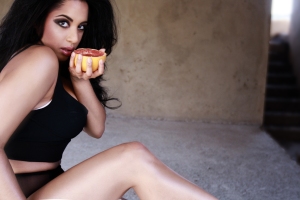 “I have suckled a baby and I know how sweet it is to love the baby at my breast but even as the baby was smiling up at me I would have plucked my nipple out of its mouth and bashed its head against the wall if I was sworn to do that the same way you have sworn to do this”.-Lady Macbeth

“I don’t think I am that ambitious, I wouldn’t bash my baby’s brain out” –Zakeeya Patel